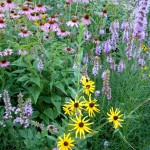 A native plant is a plant that is indigenous to the area you live.  In the mid-west, natives are generally considered to be plants that were here before European settlement before the 1850s.

While maintaining some lawn as recreational space is appropriate, it is currently the most prevalent “crop” in the United States. We have 40 million acres of lawn (62,500 square miles) that provide no nutritional value to people or wildlife. So, if the only time you go out to your lawn is to mow it, I challenge you to re-think your landscaping. Your yard is valuable real estate, and you should live on it and make use of it. It’s a pretty expensive piece of art if all you do is look at it.

The current lawn practice that bothers me the most is the blatant and commonplace water squandering. This is our children’s drinking water we’re foolishly spraying about—often in the wind, during the hottest time of the day and onto sidewalks and driveways. Bottom line? Aquifers, the source of drinking water for millions, are not easily replenished. Aquifers recharge at different rates, but the time is measured in geologic time, not in generations.

A significant amount of water in my region is used to water lawns during the summer months. For example, the City of Shoreview’s Public Works Department reported that average winter water pumping is around 1.5 million gallons of water per day. During peak demand periods, mainly summer months, pumping can reach 11 million gallons a day! The grasses that make up most lawns have shallow root systems and are incapable of finding their own water. In order to keep lawns green, constant watering is required. It would be appropriate to outfit blades of grass with tiny I.V. bags and oxygen masks because these vast expanses of green are essentially on life support. Some of my neighbors have automatic sprinklers that even water in the rain. This is especially disturbing to me since, for the past ten years, people have been asking why water levels in area lakes have been steadily decreasing. Research by University of Minnesota students and the U.S. Geological Survey (USGS) points to over-consumption of water in our region, which is depleting the Prairie du Chien-Jordan aquifers and White Bear Lake. In short, the lake sits on top of the aquifer and since the aquifer is being depleted, the lake leaks into the voided aquifer. Like climate change, I would love it if someone could dismiss these findings as hooey, but no one can. Speaking of climate change, by 2050 the average temperature in central Minnesota is predicted to be five degrees Fahrenheit warmer, but rain and snow fall may only increase by about two inches. With increased evaporation and decreased precipitation, water will likely be in short supply.

To me, it is common sense to curb our unsustainable use of water. I like to garden with native plants because, once they are established, they are basically self-sufficient. I water them during their first growing season and after that, they fend for themselves. Native prairie plants can live independently because they have evolved to withstand wildfires by putting a good share of their energy into their roots. After the fires sweep through, only the tops of the plants are damaged and the plants spring right back from the long roots.

Prior to European settlement, more than 18 million acres of prairie covered Minnesota. Our prairie lands were part of the largest ecosystem in North America, which stretched from Canada to Mexico and from the Rockies to Indiana. A wealth of diverse species, habitats, and cultures thrived here. Today, less than one percent of Minnesota’s native prairie remains.

The biggest reason for habitat loss is population growth. The population of the United States—now more than 300 million people—has doubled since I was a kid and the population continues to grow by about 8,640 people per day. Between development and agriculture, we have modified 95 percent of our lands. Anything we can do to reintroduce a little native habitat is beneficial. Of course, it’s most beneficial if the space is contiguous, so you might think, “What difference will my quarter-acre make?” Well, if you get your neighbors on board and they get their neighbors on board and… Okay. You see where I am going.

A nice reward for planting a native garden is watching the birds and butterflies and knowing you’re providing pollen for beneficial insects that sustain our food system. Native plants attract beautiful and diverse native butterflies, pollinators, and birds to your yard. Plants and animals evolved together over time, and have complex relationships: they depend on each other for food, habitat, and seed dispersal. For example, milkweed contains a a variety of chemical compounds that make monarch caterpillars poisonous to potential predators.

Well-known professor and chair of entomology and wildlife ecology at the
University of Delaware, Douglas Tallamy’s research indicates that ornamentals support 29 times less biodiversity than native plants do.

If you think you’re too small to be effective, you have never been in bed with a mosquito.

Invasive species, including plants, animals, and insects, have earned official standing as a leading threat—second only to habitat destruction—to native species of the United States. Invasive species are non-native (or alien) to the ecosystem and are likely to cause environmental harm, economic harm, or may even harm human health. “Perhaps the most extreme negative effect invasive plants have on the environment is their ability to limit biodiversity. This alters natural ecological processes by reducing the interactions of many species to the interactions of only a few. If diversity and quantity of native plants diminish, so too does the diversity and quantity of native wildlife.”

Why Do We Need Biodiversity?

Biological diversity, or biodiversity, is the number and variety of organisms found within a specified geographic region. There are ethical, aesthetic, and economic reasons why we need to care about biological diversity, but there’s also a fundamental reason: because the Earth’s processes sustain us. Humans cannot live as the only species on this planet because other species create ecosystem services that are essential to humans. Biodiversity losses are a clear sign that our own life-support systems are failing. When biodiversity is disrupted, even if it occurs far away, the effects reverberate across the world. For example, we may experience larger hurricanes, longer droughts, crop devastation, food scarcity, and water scarcity. Conservation International’s slogan is “lost there, felt here.” Indeed it is.

“Natural ecosystems provide a wide range of benefits and “services” to people who do not have or cannot afford a local supermarket or plumbing: they supply fresh water, they filter pollutants from streams, they provide breeding ground for fisheries, they control erosion, they buffer human communities against storms and natural disasters, they harbor insects that pollinate crops or attack crop pests, they naturally take carbon dioxide out of the atmosphere.”

Another reason I tout native plants and edibles is to reduce air pollution. Did you know that running a typical gas lawn mower creates more pollution than driving a car? That seems crazy to me. At least a car gets you from point A to point B rather than just going around in circles. Reducing the amount of grass you have to mow is an easy way to improve air quality.

And speaking of gas, the Environmental Protection Agency estimates that more than 17 million gallons of fuel, mostly gasoline, are spilled each year while refueling lawn equipment. That’s more than all the oil spilled by the Exxon Valdez in the Gulf of Alaska. In addition to groundwater contamination, spilled fuel that evaporates into the air and volatile organic compounds spit out by small engines make smog-forming ozone when cooked by heat and sunlight.

We have found our battery electric mower to be a good option to reduce air pollution. Maybe some day we won’t need as much lawn for play space and we can go back to the reel push mower we had for our small Saint Paul city lot.

I hope that I, along with 97 percent of the scientific community, are dead-wrong about climate change. I want all of these extreme weather events, instances of southern plants migrating north, and melting ice caps to be flukes. But that sure doesn’t seem to be the case. Native plants (as opposed to ornamental plants) are more tolerant of extreme weather conditions such as periods of drought and excessive rain, so these plantings will be more prepared for what might be to come. Of course, all plants (yes, even lawn grass) sequester carbon dioxide to help offset emissions.

Native plants rarely need pesticides or fertilizers. If you are like me, you don’t want to be putting chemicals on your food. In Chapters Eight and Nine, I will talk about how you can avoid the use of chemicals through careful planning.

Evolving Ethics and Thinking about the Future

We abuse land because we regard it as a commodity belonging to us. When we see land as a community to which we belong, we may begin to use it with love and respect.

What will children in the future think of us? As a kid learning about slavery and Nazi Germany, I remember clearly wondering how society could have gone along with these institutions and political systems that were obviously wrong. I imagine a classroom in the future where thirsty children are learning about how their drinking water was stolen from them by people who just wanted a green, ornamental yard. They will sit in disbelief, trying to make sense of why prior generations, who knew that water is essential to sustain life, decided to use their drinking water so foolishly. Perhaps you are taken aback by my comparison of slavery and genocide to environmental degradation. Surely the impacts of environmental degradation are not as direct nor as immediate as genocide and slavery. However, by degrading the environment, we are certainly limiting the freedom of future generations. Perhaps we are even limiting their ability to survive.

As a society, we’ve made some progress in how we treat women, ethnic groups, and people with various sexual orientations. Not to say these issues are resolved, but there has been progress and most people recognize that these changes needed to happen to ensure that all people should be treated fairly and given equal rights. It’s now time to extend these same rights to the land and its critters. This is not a new concept by any means; Aldo Leopold discussed it at length in the “Land Ethic” chapter in his book, A Sand County Almanac, which he wrote in the 1940s. And Dr. Seuss advocated speaking for the trees in the The Lorax in 1971. I have hope that people will see the mutual benefits of treating the natural world with respect.

HOW DO I GET STARTED?

Do you want to find out which plants will thrive in your yard? This plant selector tool is really handy to help you find a plant for your soil, light and bloom time of preference.

The Blue Thumb – Planting for Clean Water website has all of the information you need to get your project planned and planted: grant information, nurseries that sell native plants, designers, installers/landscapers, how-to videos, cost-calculator…